Comment of the week: more, indeed Moore, on religion and 'global warming'.....

"If I am right, the politics of climate change are bad. They attract the self-righteous and the self-flagellating, the controlling, the life-denying, the people who don't like people, the people who, like Private Fraser in Dad's Army, think we're 'all DOOMED'. And when I listen to many of the scientists who join in the argument, I often hear in what they say not the voice of science itself, but of the bad politics, thinly disguised by a white coat."

As on EnviroSpin on Thursday, the theme of religion and climate change appears to be in the air. Today, however, it is brilliantly expounded and exposed in a magisterial piece from Charles Moore for his Saturday column [from which the above quotation is taken]: 'What you get when you mix Red and Green - a bad political climate' (The Daily Telegraph, April 1 - and it's no joke!).

Here are some further selected quotations for your immediate delectation (but please do take time to read the complete article):

"It seems to me an almost precise description of the mental attitudes of large parts of the Green movement. Tremendous rage is combined with tremendous lack of inquiry: Green ideas do indeed sleep furiously."

"In the Eighties, it was Margaret Thatcher, of all people, who was attracted to the theory of global warming. She saw it as a justification for the development of nuclear power. Her experience with the oil crises of the 1970s and the coal strikes of the 1970s and 1980s made her keen to get away from fossil fuels.

But with the end of the Cold War, and therefore the collapse of heavy-industry-for-socialism, the Left began to find in Green issues a new unifying theme. If the workers were not going to get their hands on the means of production, the theory had to shift. Now those means themselves were wicked. Capitalist greed, especially American greed, was destroying the planet, they decided."

"To those who like the idea that the state can control everything, it must have been a constant source of irritation that the weather could not be subject to five-year plans and government targets. If you accept climate change theories, it can be, indeed it must be. Without global governmental action, the doctrine teaches, we shall all perish."

"At this point, the religious impulse forms an unholy - or rather, a holier-than-thou - alliance with the political. In every age, religions have tended to relate extremes of climate to sin." 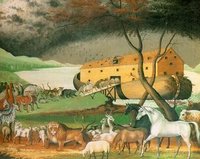 "The modern equivalent of the Ark is the Kyoto Conference." [Opposite: painting by Edward Hicks (1780–1849), showing the animals boarding Noah's Ark, two-by-two. Image public domain, from Wikipedia]

"If you do not accept this, you cannot be part of what in Genesis is called the covenant of the rainbow. You are Bad."

"Under this huge moral blackmail, the prudent politician, particularly the politician who does not have to make actual decisions, bows the knee. David Cameron sticks a solar panel on his roof, just as a New York mayoral candidate wears a shamrock on St Patrick's Day. It is presumably only because Mr Blair knows that he is leaving his job that he dares to point out that China, India and Brazil, which are not bound by the Kyoto targets, are committing sins of emission beside which our modest transgressions hardly trouble the scorer."

I just love that neat side comment on Cameron - a solar panel and/or wind turbine on the roof is just like wearing a little coloured ribbon for this or that cause.

Interestingly, this excoriating analysis is mirrored by another leading commentator, Matthew Parris, writing in today's The Times [no hyperlink in this case for copyright reasons - go to The Times Online]. Although perhaps less trenchant than Moore (Parris' comment is, as ever, too long), it likewise contains some splendid passages, like:

"Buttonhole a passionate eco-apocalypticist and tell him a way has been found for us to cut carbon emissions perfectly painlessly, and carry on living as we do. Observe the involuntary anger cross his face."

'Global warming' has unquestionably morphed into the grand narrative of the day. It has replaced Marxism as the driving force of much of the Left. I am absolutely delighted that the Barthesian myth is, at last, starting to be exposed for what it is: a deep and bitter anger that the world, and its people, cannot be controlled by those who think they know best. The sin of Saruman is ever with us.

Thus: beware the knock on the door. The Green evangelists are abroad, and they are after your free and living soul.

Philip, "Sorry mate, can't talk now, even if the watch towers are going to be flooded. Haven't had breakfast yet. By the way, have you heard of the geological sequestration of carbon? No, no! Please don't bother to come back. Thanks." Gee! Strong coffee!
Posted by: Philip / 8:08 am / E-mail this post to a friend: