Now, I can't often, as 'EnviroSpin' regulars know, stomach The ["We're All Doomed!"] Independent, but today the newspaper carries two articles which it is very much worthwhile your deconstructing and comparing, for they reveal, perhaps inadvertently, much about the politics of climate change in the UK.

The first piece is under the byline of Tony Blair, the British PM, himself, and those who know what I have been writing about Blair and climate change over the last few months might recognise one or two of the phrases and arguments employed: 'Tony Blair: "We must do more to beat climate change"' (The Independent, November 19).

It is especially important for visitors from across 'The Pond' to deconstruct Blair's measured words carefully. Above all, one must note the studied rejection of Greenpeace's arguments, the (new) acknowledgment about the importance of clean coal (predicted, of course, on this blog), and the essentially international approach. 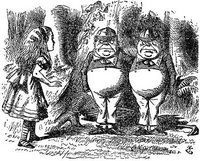 By contrast, the second article, which is by the newspaper's Political Editor, exposes the sheer political opportunism and ill-thought out 'Greenism' of the Conservatives (a shame on Cameron, Yeo, Letwin, and Vaizey): 'Cameron could cash in on Labour failures, says aide' (The Independent, November 19). I predict this could backfire. [Right: Cameron (Tweedledum) and Yeo (Tweedledee) rattled by the 'Green' legacy of Mrs T! Tenniel's immortal picture: the image is in the public domain and it is taken from Wikipedia's article on 'Tweedledum and Tweedledee'.]

Of course, as one of the leaders in UK climate-change ecohype, The Independent is delighted to be able to try to play off one against the other to force more extreme policies and statements.

But Blair, yet again, demonstrates that he alone understands the true nature of the international game, with his comments on coal, and, above all, with his recognition - for the first time publicly, I think - of how unimportant the UK is in energy and emission terms:

"...Even if the UK achieves every emissions target we set ourselves, we will have tackled a mere 2 per cent of the problem. That is why international action and consensus is so important..."

Just so. Watch this space - the home UK politics are turning out to be fun. Time to go Through the Looking Glass.

Philip, increasingly fascinated by the machinations of climate-change politics in the UK. 'Science' is no longer the game at all; we are now in a political Blunderland, with the Conservatives playing Tweedledum and Tweedledee. But to important matters - the football results.....
Posted by: Philip / 4:54 pm / E-mail this post to a friend:

Today's blog is simple: a chance to hear voices of difference, voices too often excluded from the Northern environmentalists' self-important cacophony.

Here are two commentaries that have just appeared which cannot be bettered; I am designating them 'Articles of the Month', and they should help us to hear, if softly and if through Northern pens, those excluded from so many environmental debates. Both articles deserve to be read in full, especially the first, a most powerful essay:

"... Curious about this brand of conservation that puts the rights of nature before the rights of people, I set out last autumn to meet the issue face to face. I visited with tribal members on three continents who were grappling with the consequences of Western conservation and found an alarming similarity among the stories I heard..." (read on)

[Upper Right: the image of a Maasai tribesman is in the public domain, and it is taken from the Wikipedia article on the Maasai)].

(b) 'Development, not climate control' (Kendra Okonski writing in the Bangkok Post, November 4):

"... Given these problems, emission controls in India would simply be counter-productive.

Fears about climate change are perhaps understandable in a country like Britain, where most people are well-nourished, live in comfortable homes that insulate them from the vagaries of the weather, and for whom malaria and diarrhoea are nuisances to avoid when spending their holidays in tropical countries.

But the priorities of Western environmentalists are often at odds with the interests of poor people.

To the millions of people who live by Nature's whims, the debate on climate change is remote, if not downright surreal.

What the poor need now is to benefit from economic development - this alone will save them from the climate."

Philip, never forgetting the voice of an old woman in West Africa, totally excluded from the world debate, saying that there were now too many trees and that she could no longer collect the grasses of her youth to make bread and baskets. It's time to listen. Coffee.
Posted by: Philip / 9:38 am / E-mail this post to a friend:

The UK media: time to grow up over 'climate change' politics.....

The mantraic criticisms of Mr. Blair just made by the ever-whinging WWF UK are rich indeed: 'Blair "failing" over environment' (BBC Online UK News, November 14). Leaving aside, for the moment, the sheer fatuousness of the concept of 'tackling climate change' (explained ever-so wearily, over and over again, on this blog), whatever one's personal position on the issue, one must admit that Mr. Blair is the only world leader to have placed climate change at the centre of the world's political agenda. If Blair had not included climate change in the G8 discussions, nobody else would have done so. And just watch what happens when Mr. Putin takes over: for 'climate change' read 'selling energy'. Pipe-dreams all round.

Luckily, however, Mr. Blair is also a political realist. He is well aware of certain abiding truths. No country is going to reduce growth; no country can 'deal with' climate change on its own without reducing its competitiveness; no country is going to opt to don a 'Green' hairshirt; few countries will now accept old-fashioned, socialistic-style European capping targets; and, the only approach to both 'climate change' and, far more importantly, a sensible energy policy is technological advancement - nuclear power, clean coal, the geological storage of carbon, and so forth.

The question one should thus be stressing [and this is the precise purpose of 'EnviroSpin'] is to ask why the UK media are willing to report so uncritically the wet and waffly criticisms of self-appointed groups like the WWF UK.

One element of the answer is, of course, simple: the sheer hatred of Mr. Blair exhibited by the UK's liberal media elite is now so extreme (and so utterly ridiculous and Pinteresque) that any issue, however large or small, will be used to attack him, from his wife's dress sense to his choice of holiday, from Baghdad to Kyoto. I have rarely encountered such malice, even in politics; as you listen to various interviewers and commentators, you can feel the vibrations of their arrogant loathings.

And the inevitable outcome is that, where climate change is concerned, the British media is failing to examine critically the issue in the light of world politics and economics. Newspapers like The Independent and The Guardian have morphed into little more than over-excitable Green undergraduate 'rags', while many other outlets adopt a wonderfully-naive and breathless 'Little Englander' approach - putting a teeny wind turbine on the roof of your thatched cottage will halt climate change in its tracks. Straws in the wind.

It is surely time for the UK media to grow up where the politics of climate change and energy are concerned. It's time to witness, for a change, the WWF UK and their ilk being mauled over totally uneconomic and utopian prognostications.

Meanwhile, this must rank as one of the more stupid protests: 'Greenpeace blockades Downing Street with tonnes of coal' (News and Reports, November 14). These poor souls appear not to be aware that clean coal (between 250 - 600 years worth available) - scrubbed of SO2, with low NOx burners, reduced mercury, fine particulates, and CO2 emissions - is going to be one of the big fuels of the future.

As a very sharp Canadian investor observed recently: it may well be time to put something into coal again. Technology is going to outdate extreme Green politics very quickly. I shall have to mine this seam again on 'EnviroSpin' later on.

Philip, increasingly interested in the gap that now appears to be opening up between the realities of world climate-change politics and the shrillness and Nutwood-style tweeness of much of the UK media on this topic. A morning cappuccino? And a slice of wry-bread toast. Carbon and marmalade all round.
Posted by: Philip / 10:17 am / E-mail this post to a friend: