Despite the tabloid vitriol, in the real world Bjørn Lomborg is winning.....

The most recent ad hominem attack on Bjørn Lomborg ("Not again!", I hear you groan) by Johann Hari in The Independent (May 20) [available at Hari's web site] is one of the more disgraceful for some time, and it leaves a bad taste in the mouth. Such vitriol represents the worst type of tabloid journalism masquerading as high-minded comment. This lamentable piece is, thank goodness, excoriatingly exposed over at The Daily Ablution (May 30) by Scott Burgess: 'Disgraceful!'. How we need such bloggers. 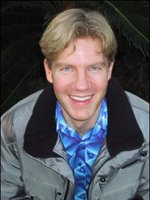 I remain fascinated, nevertheless, to try to understand precisely why Lomborg [opposite: public domain] is still subject to such reptilian loathing. Bjørn is one of the nicest of men, and he is both thoughtful and careful in his use of evidence. He presents his material in the kind of way that one observes all the time at academic seminars across the world. I have met him on various occasions, and I have always found him to be courteous, interesting, and a most stimulating and friendly discussant.

My own interpretation is that the hatred stems from four factors:

First, he is seen as an apostate, and one that rabid journalists like Mr. Hari are now desperate to disown and to destroy.

Secondly, he dresses in a manner that once typified radical, leftist 'Greens', wearing a t-shirt, jeans, and trainers, even when speaking at prestigious events. Lomborg and I were the key antagonists in a splendid debate held only recently in London. The two 'Green' proponents wore business suits and ties, while Lomborg sported his usual t-shirt, and I dressed Cameron-style with open-neck. A nice lady came up afterwards to say that she found it somewhat amusing (and counter intuitive) that it was we who looked like the 'radicals'. She also voted for us because she didn't trust "the suits" - and these new "suits" just can't stand to be contradicted and challenged.

Thirdly, and most importantly, Lomborg did what the 'Greens' have been most dreading. He challenged openly for the first time, and using their very own statistics, their most fundamental, and often hidden, agenda, namely the usurping of normal economic processes by the imposition of carefully-manufactured ecological imperatives and disasters - and, don't underestimate it, 'global warming' represents the keystone of this arch plan. They were livid - their conceit was exposed.

Finally, his book was published, with strong accolades, because it was (quite correctly) treated as a tome by a statistician and an economist. He thus managed to bypass the ecomafia of referees who are desperate to close down true debate (all in the name of peer review, of course).

Yet, despite the vitriol and abuse, in the solid world, beyond the febrile and hysterical rantings of a few (surprisingly few, I might add) European 'Greens', and some of the 'liberal' media, like The Independent, BBC television (far less BBC radio), and Channel 4, Lomborg is quietly winning the debate.

As Canada's The National Post (May 30) points out in 'Ottawa's Kyoto plan wins backers in Bonn', the Kyoto Protocol is slowly and inexorably being ditched and abandoned:

"Ottawa won the unanimous support of developed countries at the conference in Bonn, Germany, for its reluctance to set new targets for the post-2012 period. It also received backing from several countries in arguing there should be no new commitments for countries like Canada until major polluters such as China and India sign up for their own targets."

And, of course, as we all know, and despite the constant rhetoric, not even Britain can, in practice, make the impossible work:

"Any sign of progress on Mr Blair's fabled low carbon economy? If anything, says Cambridge Econometrix (CE), the country's leading readers of the carbon runes, we may be going backwards. Their latest report says that despite recently announced new measures, the government is likely to miss its 20% carbon-reduction goal by 2010 by 'a large margin'. Even the new forecast of a 14% carbon reduction by 2010 requires prices of tradeable allowances under the Emissions Trading Scheme to rise sufficiently to reduce emissions, particularly from coal-fired power plants. That's very unlikely. In the past fortnight they have completely collapsed." (The Guardian, Society Guardian, 'Eco soundings', May 31).

In truth, carbon emissions are a proxy measure of economic growth. No government is going to sacrifice economic growth (nor should they, especially not countries in the developing world). Where 'Green' innovation can stimulate growth, it will be absorbed into the normal economic process. Utopian 'Green' nonsense, on the other hand, will be quietly eschewed, stabbed in the back, while praised in public, like Brutus lauding Caesar.

The economic imperative, coupled with dynamic adaptive innovation, will continue to thrive. Lomborg, in essence, has won. Hence the ill-tempered outbursts of Mr. Hari and his ilk. Sadly, in the meantime, such people have caused us to waste so much energy on sheer fantasies. As Lomborg says, we should be concentrating on getting the best outcomes for our money, especially for the poorest and the most disadvantaged in the world.

Philip, off for a tardy breakfast. Please can we have some 'global warming'? It is the last day of May, and it is still too chilly to sit out in the garden with my coffee.

*In the meantime, please feel free to visit my new Web Site: 'Philip Stott's Music Box' (more compositions just up). Thanks.
Posted by: Philip / 7:14 am / E-mail this post to a friend:

In its infinite wisdom, and with God-like power, the EU has today decreed that we can STOP climate change, and that "YOU CONTROL CLIMATE CHANGE" [BBC Online Europe News, May 29] (I bet you are pleased!) 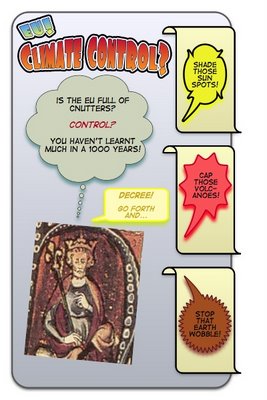 Halvard Solness, Ibsen's Master Builder, is alive and well, but he is now constructing mighty towers in the rarified atmosphere of Brussels. Such hubris, however, comes before a mighty fall......

HILDA. [Stares fixedly upwards and says, as if petrified.] My Master Builder.

RAGNAR. [Supports himself, trembling, against the railing.] He must be dashed to pieces--killed on the spot.

ONE OF THE LADIES. [Whilst MRS. SOLNESS is carried into the house.] Run down for the doctor---

ANOTHER LADY. Then call to some one!

OTHER VOICES. [Nearer.] The head is all crushed.--he fell right into the quarry.

HILDA. [Turns to RAGNAR, and says quietly.] I can't see him up there now.

RAGNAR. This is terrible. So, after all, he could not do it.

HILDA. [As if in quiet spell-bound triumph.] But he mounted right to the top. And I heard harps in the air. [Waves her shawl in the air, and shrieks with wild intensity.] My--my Master Builder!"

And Hilda, remember, is the archetypal Green ... so dangerous! Beware the siren voice!

Listen rather to the older wisdom of King Cnut, son of Sweyn Forkbeard and Queen Gunhilda.

Philip, the world has gone completely bonkers. Stopping climate change?!? I ask you. We are tilting at clouds and the cosmos! Much coffee required - urgently.
Posted by: Philip / 2:22 pm / E-mail this post to a friend: