Many newspapers, including some which should know better, are getting over-excited about the 'discovery' that bees, butterflies, birds, and "b....." squirrels might actually adapt to climate change, a story more sensibly reported here: 'Recent, rapid climate change is driving evolution of animal species' (EurekaAlert!, June 8).

Not to be outdone, 'Envirospin', ever at fever pitch, and up with the latest, also reports (for your edification) the story, BELOW: 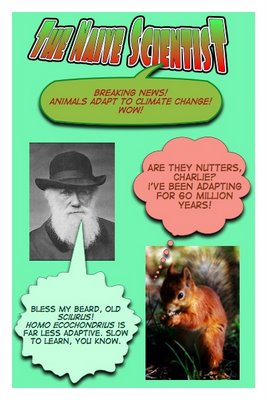 Philip, off to the garden with Squirrel Nutkin. "Hazelnut coffee do for you, Nutters?" Acorn cups all round! Kind readers: please note that 'EnviroSpin' will now be having a rest for week, after which we shall (hopefully) have evolved new vigour and a sharper tongue, all ready for further 'Daily Gnaws'. And remember: "No gnaws is good gnaws!"
Posted by: Philip / 11:11 am / E-mail this post to a friend:

Wishful thinking versus the petrolheads.....

Only recently, Sir Jonathon Porritt, he of the boringly-PC 'Sustainability Commission', called Jeremy Clarkson, he of the highly-successful television show, Top Gear, an "outstandingly bigoted petrolhead" [see: 'Scourge of the greens: Clarkson branded "a bigoted petrolhead"', The Independent (May 31)]:

"He has insisted there is almost certainly no such thing as global warming, threatened to run down cyclists who get in his way and vowed to keep his patio heater lit 24 hours a day, just to annoy Greenpeace. But the environmentalists are no longer prepared to put up with Jeremy Clarkson's car-loving agenda.

Sir Jonathon Porritt, whose feud with Mr Clarkson dates back several years, has launched his most scathing attack yet on the presenter of the BBC2 motoring show Top Gear, branding him an 'outstandingly bigoted petrolhead'....."

Unfortunately for Ye Etonian Greens, the most recent predictions are with Mr. Clarkson and with his "car-loving agenda". Putting it simply, Sir Jonathon, The Independent, and the bicycle-loving fraternity/sorority (bloomers all round) are pedalling uphill, without gears, in a gale-force wind.

The fact is that the combustion engine will be with us, and in increasing numbers, for a long time to come:

(1) fuel-cell cars are only likely to appear in any numbers by 2020. They will then take at least 10 years to achieve a market share of c.1 percent, a 50 percent market share by 2050 being regarded as highly optimistic;

(2) for hybrid electric cars to become effective, a major breakthrough in battery technology is required, along with massive investment in charging infrastructures;

(3) the main current goal of car makers is to make petrol engines more efficient and to make diesel engines cleaner. This is likely to remain so for the next 20 years at least, even with Government support for alternatives;

(5) price will remain the determining factor because car companies depend on high-volume sales. Alternatives will not be able to compete for a long time;

"India registered the fastest growth among the top 15 passenger car producing countries in the world in 2004. As per latest rankings by the International Organisation of Motor Vehicle Manufacturers, OICA, India's car production grew 30 per cent in 2004 while Brazil was the second with 17 per cent growth....."

I'm afraid that Sir Jonathon, The (utterly lurid) Independent, and far too many BBC metro commentators are just 'talking up' what they want to happen, when the reality is entirely with Mr. Clarkson and his gear stick, from Beijing via Delhi to Rio.

What the British people should be told is the straightforward, unvarnished facts, not utopian, wishful, media thinking. Taking your metro bike to work will have no effect on climate whatsoever! As bikes in India and China are being ditched, world car sales are growing, and will continue to grow, with petrol and diesel remaining Dual Kings for the foreseeable future. Top Gear is in for a very long run indeed! And where are all the bikes? I recently observed a bike lane for quite some time to record..... not a single bike, just congestion caused by the bike lane!

I think Sir Jonathon had better attend to his pot-porritts, as Mr. Clarkson wittily responded to the attack.

Philip, now, why not try this Sir J.: eau de petrol, with light diesel undertones, and oil of Arabia? Well, well, well! Nodding donkeys all round. Coffee in the garden. At last some warmth - no patio heater required today.
Posted by: Philip / 10:23 am / E-mail this post to a friend:

In the UK, just another day of carbon claptrap.....

Yesterday was a classic for carbon claptrap in the UK, from BBC Television, from scientists, and from big business. What nonsense is being peddled in the name of 'global warming'!

BBC Television, as ever, was the worst, with yet another gloom-mongering effort, 'Five disasters waiting to happen' (BBC 2). The only disaster is that we have to pay a licence fee for what is, essentially, Government propaganda (give me radio any day). Interestingly, I received e-mails (timed during the programme) from incensed 'EnviroSpin' readers about 'the twaddle' that was being peddled uncritically on the programme. I got the impression that the red-hot e-mails were sent to let off steam before folk were tempted to throw a brick through the screen. I have to say that, personally, I gave the programme the widest of berths - the weather was too nice to waste on watching hyperbolic 'rubbish on the tele'. Until BBC Television grows up about the science, economics, and politics of climate change, it really is better for one's health to chill out with a glass of wine and The Times crossword in the garden. Thankfully, today's Times also gives the programme a wide berth, their television reviewer likewise having had better things to do or to watch. I'm not surprised - the more BBC Television churns out this unbalanced stuff on climate, the more people will switch off, both physically and mentally. It really is time for a hard-nosed Beeb producer to declare that "enough is enough", and to put an end to so much over-egged output. Meanwhile, the rest of the world sails happily away from the Good Ship 'Kyoto'.

But, of course, jaw-droppingly naive scientists don't help either. Yesterday, some earnestly warned of the dangers of drag in cars proudly sporting two St George's flags in support of 'Our David' and the lads at the World Cup - that's an extra litre of of fuel per hour! I think, for once, a two-finger sign is entirely justified. "Put out more flags", say I. And, don't underestimate the hidden class warfare in all this - St. George's flags are perceived as working class, the ill-bred bling of Essex Man. "Get yer flags out, luv!"

Then, finally, there was big business and a wondrous meeting between members of the pompously-named 'Corporate Leaders Group on Climate Change' (including Shell UK and Standard Chartered Bank) with Tony Blair. This proved to be a glorious example of protean capitalism at work. Of course, we have to help (lead?) on climate change, but only when we have positive incentives and a boost to that bottom line. I just love the way that big business embraces the 'global warming' myth, and then turns it to its own advantage, ever (quite rightly) with an eye to building that competitive edge. The same is happening with 'organics'. "Go for it lads!"

So, Tuesday was but another day of carbon claptrap.

I suspect, at some point, that we are really going to weary of it. In the meantime, we must smile wryly, yet again, at La Comédie Humaine, and at our self-delusional world.

Sadly, as readers of this blog are too well aware, not a smidgen of the carbon claptrap will make one blind bit of predictable difference to climate.

We are playing silly games. Nintendos all round.

Philip, off for a calming coffee in the garden. Time to read Balzac again?
Posted by: Philip / 9:46 am / E-mail this post to a friend: